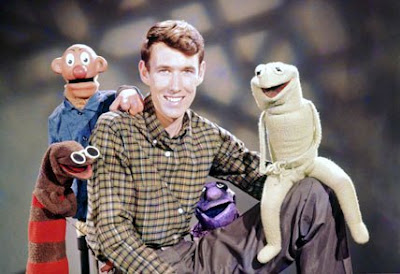 As a young man, puppeteer
Jim Henson was bursting with creative ideas and wasted no time in making things happen.

In the mid-1950s, he was making puppets for children's television before he was out of high school.

He created his first muppet TV show, Sam and Friends, during his freshman year of college.
The five-minute program aired daily, and ran for six years.

Simultaneously, Henson's muppets were making other TV appearances on variety shows and in assorted commercials.

But it wasn't all about muppets all the time...

When Henson graduated from college in 1960, he was married, had a new-born daughter, and had been working in TV and advertising for several years. He was 23.

That same year, Jim Henson released an odd, jazzy little 45 single.
On the A-side, 'Tick-Tock Sick', he complains of being 'bugged' by the relentless ticking of the clock. 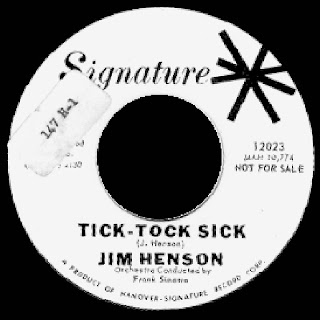 Regarding this 45 and a recurring motif of 'racing time' in Henson's work, Karen Falk, historian and head archivist for The Jim Henson Company said:
"Jim Henson accomplished an amazing amount in his life, but given the large number of files on unrealized projects that are in the archives, he clearly didn't have enough time to do all that he wanted to do. And 'Tick-Tock Sick' tells us that he was already feeling the crunch just six years into his career." 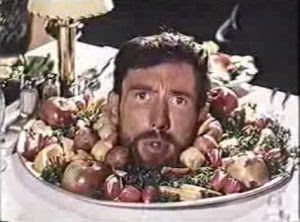 As the 1960's progressed, amidst increasing exposure of The Muppets, Henson also began working with experimental film.

'Time Piece' was a short film that Henson wrote, produced, directed and starred in. He began production in 1964 and took about a year to finish, working on it in between TV projects.

It premiered at New York's Museum of Modern Art in May of 1965, traveled the film festival circuit, and was nominated for a Best Live Action Short Subject Oscar in 1966.

- This post is a companion piece to one posted at Video Cabinet in Limbo, also regarding Jim Henson's muppetless productions.
Follow link to: Richard Schaal in Jim Henson's teleplay, 'The Cube' (1969)

See also:
Circa 1965, Henson made two Muppets, Inc. industrial promo films pitching to Wilson's Meats, an advertising account, filmed in a tongue-in-cheek, mock-documentary style.
Follow links to:
- Wilson's Meats #1
- Wilson's Meats #2
The In Crowd on or around 7/19/2009