(A brief preamble: I was already thinking of our friend Gilligan and his blog, Retrospace, as I started preparations for this post, and that was before Gil was kind enough to bestow a Great Read Award upon ILTS this past Wednesday. The award's emblem of honor is posted towards the bottom of the lovely brown sidebar, big blushing thanks are extended to Mr. G, and this post is dedicated to him.)

This two-page article ran in the July, 1966 issue of TV Radio Mirror.

(Click on images to enlarge in a new window) 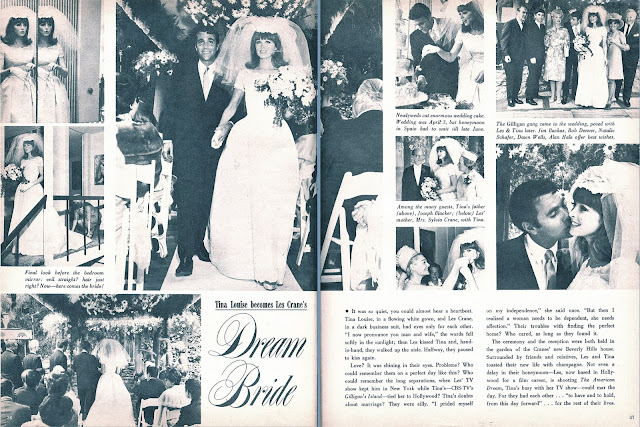 - Click here to view a super-sized image of page 1 in a new window.

- Click here to view a super-sized image of page 2 in a new window. 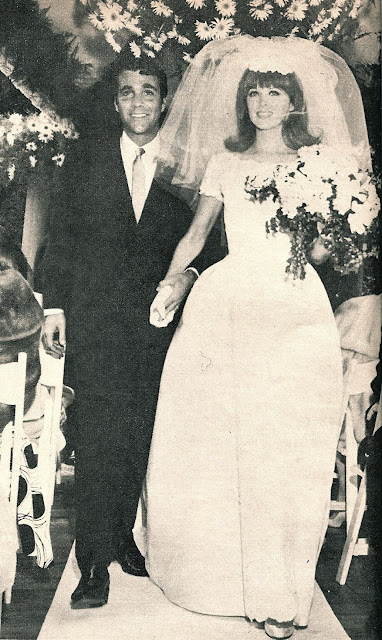 In the early 1960s, Les Crane had hosted a late-night radio talk show in San Francisco, where he often stirred up controversy with his
left-wing liberal views and confrontational interview style.
In 1963, Crane took his show to New York City and to late-night television.

His big west coast movie career mentioned in the magazine article didn't go much beyond his supporting role in the film adaptation of Norman Mailer's
An American Dream.

By 1966, via her role as 'the movie star' on TV's Gilligan's Island,
Tina Louise had rocketed to a level of fame she'd not reached after fifteen years as a pin-up model, nightclub singer, and film & stage actress, though she was discomforted by the notion of being type-cast by her 'Ginger' portrayal.

When the sitcom was cancelled in 1967, she was quick in her attempts to distance herself from the role.

In the photo below, ▼ the newlyweds pose with Tina's co-star castaways... 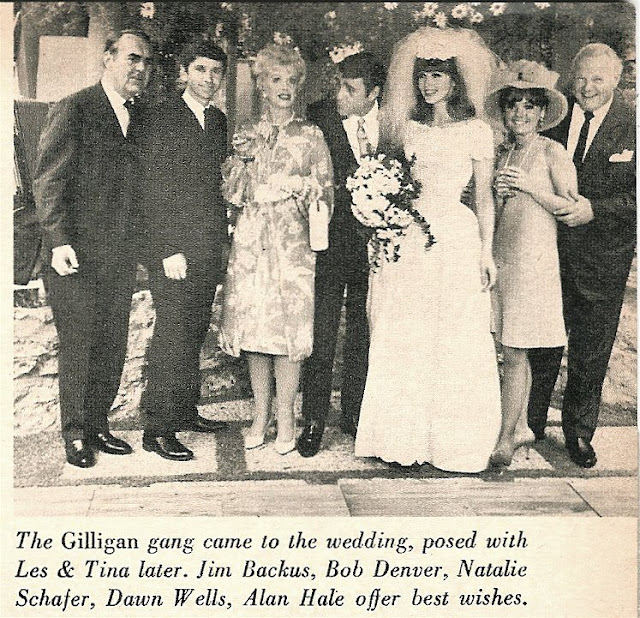 ...Though significant in his absence from the photo is 'The Professor', Russell Johnson.

What bit of behind-the-scenes intrigue can we infer from his not being present? Does it lend anything to the various sordid debates about the characters and cast of Gilligan's Island?

I prefer to believe that perhaps Russell Johnson was behind the camera, snapping the photograph with a camera he'd built out of a coconut shell and some beach glass. 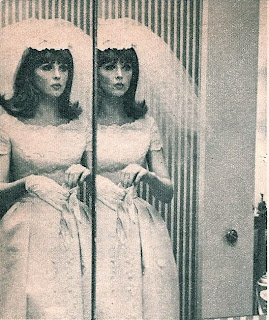 At the time of the wedding, (Les Crane's third - - or perhaps fourth - - marriage) the tail end of the second season of Gilligan's Island was airing on Thursday nights, and presumably the cast was busy with production for the sitcom's third season episodes.

CBS then moved the show to Monday evenings, and cancelled the the series at the end of the third season.

Tina Louise had several TV and film appearances after 'getting off the island', often seeking out 'grittier' or more serious roles.

Les Crane returned to talk radio in Los Angeles in 1968. 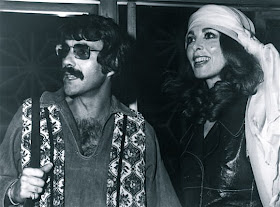 Perhaps Crane's most often-noted achievement was his Grammy award-winning 1971 spoken-word recording of the prose poem (and popular
dorm-room poster) 'Desiderata'.

- Follow the link to
Richie Unterberger's liner notes to a re-release of the Les Crane LP that included his 'one-hit wonder' Top-10 single.

Tina Louise and Les Crane were divorced in 1974, the same year their daughter, Caprice Crane was born.
Not bad for a Hollywood marriage of that era.

In the 1980's, Les Crane had great success after moving into the software industry, founding a company that made inter-active games and typing tutorials for PCs. He died in 2008, at age 74.
The In Crowd on or around 7/15/2009