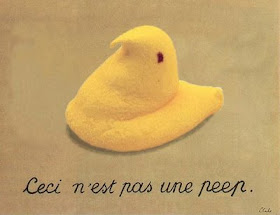 Hello again!
Yes, months have passed and there has been not a peep from this blog, and it's been many more months since I've posted any sort of regular 'Reasons To Be Cheerful' entry.

Personally, I hate reading blogs with excuses, so for me it's been easier to say nothing.

(Above: 'This Is Not A Peep'▲ found in the flickr stream of Coyote Crossing, via Aristocob)

Thanks to everyone who has written, whether wondering about my whereabouts, expressing concern or wishing well.

While all my stuff continues to sit boxed up in storage hundreds of miles away, for the forseeable future it seems the only stuff I can enjoy sharing with you on this blog are things I've bumped into recently, and stuff I can point you towards that I've seen on the interwebs. 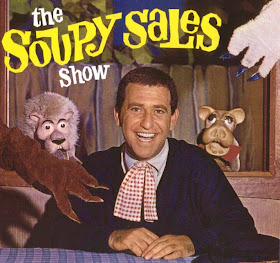 But it's still great fun to share, so let's get to it!

At right is the cover image from an LP I had as a little kid, one that I played over and over again on my little variable-speed portable phonograph, although I'd never seen the TV show.

I'd never caught Soupy's schtick with Pookie or White Fang or the rest of his puppet friends, but was still fascinated and entertained.

- Follow another link to a nifty collection of Soupy Sales Memorabilia. 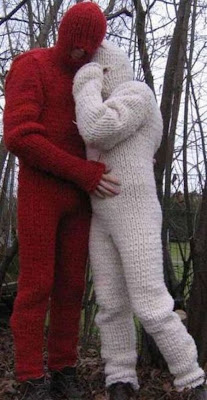 2. Perhaps photos of 'Woolies' have already found their way to you?

It was news to me, and to a friend who passed them along to me. She says she was innocently googling for information on knitting with wool and came across photos of wool fetishists in various parts of the world.

These photos are from a French fetishists forum (Not quite safe for work), as featured at Izismile.Com.

Whatever makes you happy is fine with me, but my first reaction was to naively wonder how long I could be able stand the heat and the itchiness - -

- - followed by wondering about how soon a fully wool body-suit would start to stink, how you deal with stains and are they machine washable. 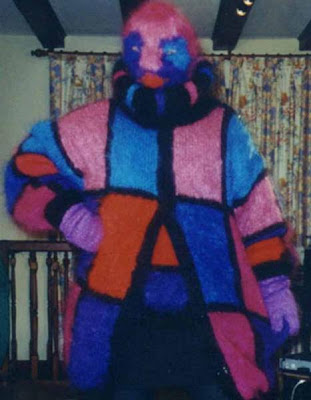 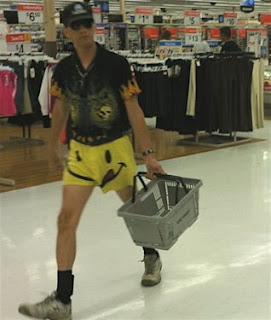 3. And then there are the average people we see around us everyday as we set about our erranding...

The administrators at People of Walmart.Com are quick to stress that their site is not affiliated with Walmart.

We'll see how long that lasts as they continue this fascinating cultural anthropology project.

Folks from all over the U.S. are sending in photos they've taken of assorted "Wal-Creatures" they've encountered in the wild.

I'm sure I'd enjoy wandering the site more if the captions included for the photos weren't often so mean-spirited, but - - 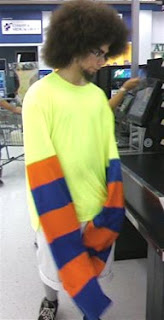 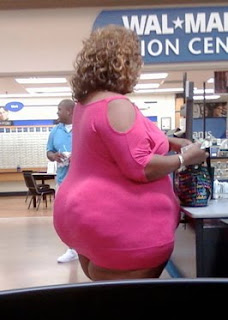 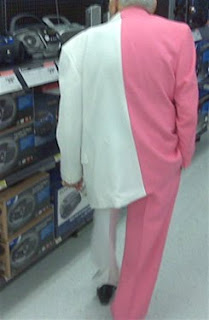 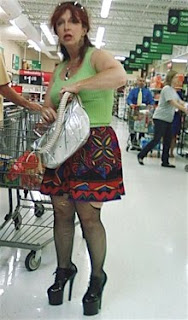 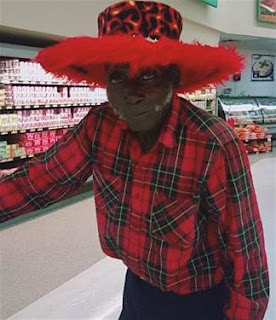 Head over to
People of Walmart.Com and see for yourself. 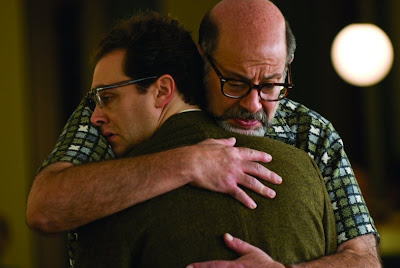 4. Speaking of the rich pageantry of fancies and foibles found surrounding the human animal, the new Coen Brothers movie has opened.

Once again they've provided that brilliant balance of great story and visuals, superb casting and perfect left-field unpredictability that I always hope for in their films.

I'm so pleased that I managed to see 'A Serious Man' before I'd heard a thing about it.
No reviews, no synopsis, no mention of who was in it.

It won't happen very often, but I think that for most films (good, bad or indifferent) entering a theater without a clue is the best way to go, if you can possibly manage it.

Probably it helps if you have a good track record with the filmmakers. 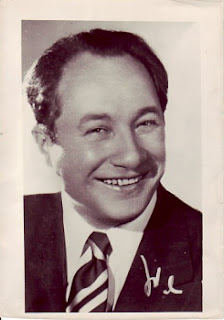 As with other flicks from the Coens, 'A Serious Man' includes an interesting soundtrack with some note-worthy recordings.

It makes great use of several cuts from Jefferson Airplane's 'Surrealistic Pillow' album and a couple of other choice bits of '60s psychedelia, but the biggest surprise is a beautifully haunting vintage vocal piece sung in Yiddish by operatic baritone Sidor Belarsky.
◀

This film may not do for Mr. Belarsky and Yiddish Folk, Cantorial and Art Song what 'Oh Brother, Where Art Thou' did for Ralph Stanley and Bluegrass, but still it's always nice to see a little spotlight land on an artist that's off of most people's radar.

Follow these links for more:
- A nice little article from the San Francisco Examiner about Belarski (who died in 1975), his long and illustrious career, and his daughter's efforts to perpetuate his music.

- 'Dem Milners Trern' leads off Belarsky's LP 'Jewish Melodies', streaming in it's entirety on a page at Florida Atlantic University's Judaica Sound Archives.
Further investigation shows that 20 other Sidor Belarsky records may be heard there, in addition to over 8000 songs by dozens of other performers ranging not just from Jewish religious music and folk song, but klezmer, children's music, comedy records and more. 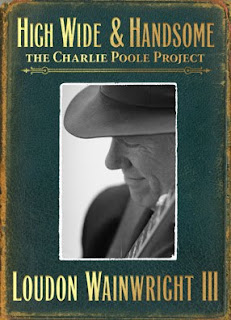 5. Speaking of vintage tuneage rediscovered, it's been out for a few months now, but I still can't stop listening to
Loudon Wainwright III's High Wide & Handsome -
The Charlie Poole Project.

- - Or trying to recommend it to people. (Thanks again to my pal Joe Sixpack for turning me on to it!)

"A grand gathering of songs both old and original..." 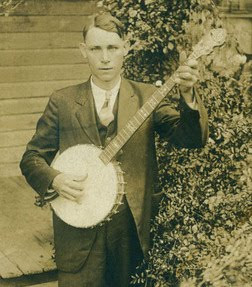 So not merely a collection of cover tunes, the 2-disc set also mingles in some new songs by Wainwright telling tales about the colorful life of Poole, as performed by Loudon and various musical friends and family members - - several assorted Wainwrights and Roches, Chris Thile of Nickel Creek and Geoff Muldaur from the old Kweskin Jug Band.

Some of LW3's fans may argue that it's not what they expected from him, but the whole project reeks of 'labor of love', and he's the perfect one to channel the spirit of a previous rowdy fellow troubadour.
Check it out!

- - And finally, a different stripe of musical archaeology, but nonetheless esoteric...

6. The lyrics to the theme from 'Mission Impossible'.

A little while back I was googling about while trying to remember obscure lyrics I'd heard to some old TV theme song or another, and found the best thing I could have hoped for;

'Seldom-Heard TV Theme Lyrics' posted at You Don't Have To Visit This Blog.

A 2006 post, and it looks like the blog may be dormant (a lot of that going around), but as of this writing, the download links are still active for a great mix of old TV themes - - most of which you never realized ever had lyrics.

The mix runs mostly to the 1960's and 70's, with a few more contemporary renditions or parodies thrown in. 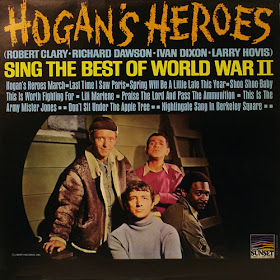 In many cases, these television themes only had lyrics after the fact, a bit of padding on a record release trying to capitalize on a show's popularity - - Or perhaps adding extra verses to the short and familiar version sung on TV.

In some cases there had been lyrics all along, written for contractual or copyright reasons that were never used.
Usually it was the right choice, especially when the themes to many action series were inexplicably forced into the role of love songs when given the vocal treatment.

I urge you to investigate this group of tunes, and to try to keep your jaw off the floor while absorbing the lyrics to The 'Hogan's Heroes' March or 'The Odd Couple', or while listening to Sammy Davis, Jr. sing the theme from 'Hawaii Five-O'. 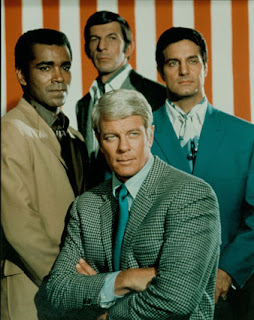 One oddball selection that's missing from the 'Seldom-Heard TV Theme Lyrics' mix is the amazing and twisted vocal rendition of the Mission: Impossible theme, performed by The Kane Triplets, a sister act popular in Vegas clubs and on The Ed Sullivan show in the 1960s.
Not sure when or how the vocal interpretation of composer Lalo Schifrin's familiar theme song came about, but the result needs to be heard. 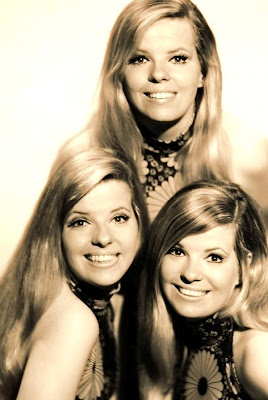 The lyrics cruise past at a speedy clip, so you'll need to listen close to catch them all.

Looking around the web, it seems that most previous attempts to list these lyrics have either disappeared or were incorrect, so please allow me my attempt to keep them alive a little longer...

(verse 1)
Fly away
Disappear
I'll be there
Waiting

Hypnotized
On a string
Following
Wanting

Love's
A waiting fuse
You can't refuse
You're gonna light it

(outro)
Fly away
Disappear
I'll be there
Waiting