The songs in the links posted below are from an old 45 of quirky but charming music originally heard as part of 'The Love Song of Barney Kempinski', a one-hour teleplay that aired on September 14th, 1966 as the premiere episode of an anthology TV series, ABC Stage 67. 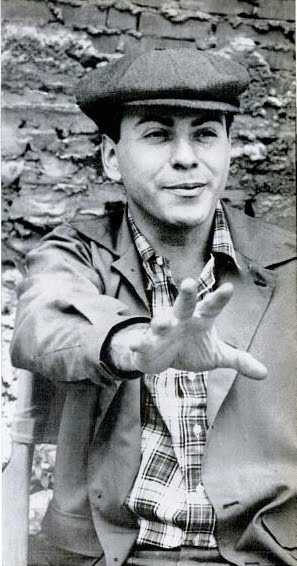 For his performance in the title role, actor
Alan Arkin received an Emmy award nomination. (- - And has the program been seen since??)

- From the synopsis posted at TV.Com:
"Barney Kempinski, thirtyish and contentedly
self-unemployed, leaves his Lower East Side apartment smiling and happy.
"On this fine sunny day he is to be married - -
3 o'clock at City Hall - - to his girl Francine.
"In the few remaining hours of his bachelorhood, Barney goes off to tour the city and sing his love song - - exuberant, irresponsible and frequently dangerous - - to life, love and the city of
New York."

The photo at right, ▶
taken during production for 'Barney Kempinski' comes from a profile article on Arkin,
"Actor's Jump To The Top", that appeared in the July 22nd, 1966 issue of LIFE magazine.
- Click here to read that article.

(An item of note for those of who've never had the pleasure of seeing this production is that there's no listing of anyone in the cast playing the role of Barney's fiancé, Francine. Presumably the character doesn't appear in the story - - ?)


- Anyone who recalls having seen this program or has more information to share is invited to leave a comment. Better yet, if you know where / how to view 'The Love Song of Barney Kempinski' nowadays, it'd be great to hear from you. It might be fun and worth a pilgrimage to The Paley Center for Media someday to try and track it down in their archives, but in an ideal world it shouldn't have to come to that. (Don't get me started on my rant about how the history of television shouldn't be slipping into the realm of archaeology...)

Looking over highlights of Alan Arkin's career, the chronology of 'The Love Song of Barney Kempinski' falls in between Arkin's breakout film appearance in 'The Russians Are Coming, the Russians Are Coming' which had premiered just a few months earlier, and his villainous turn the following year opposite Audrey Hepburn in the thriller, 'Wait Until Dark'. 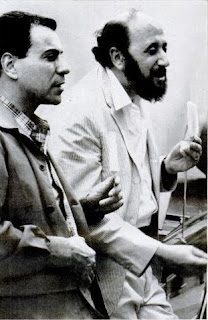 ◀ At left; from the LIFE article, Arkin on set with
'Barney Kempinski' author Murray Schisgal.

Beginning in 1964, Arkin had appeared on Broadway in the original run of Schisgal's play, 'Luv', directed by Mike Nichols.

Both also shared roots to improvisational cabaret theater in Chicago; Alan Arkin with The Second City, and Mike Nichols to its precursor, The Compass Players. 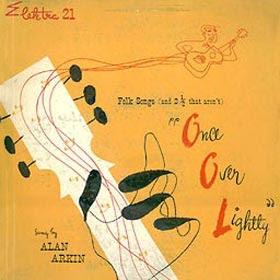 Arkin's musical roots go back still further; at least as far as a folk-singing record, 'Once Over Lightly', released on the Elektra label in 1955. ▶

That release would lead him to the ranks of several folk groups before joining Second City, including
The Tarriers, Jeremy's Friends, and The Babysitters.

- Many of those early folk recordings can be heard at an Alan Arkin fansite (follow link), though you may want to beware of possible sporadic 'malware' warnings popping up...

(Please Note: In preparing this post, I was initially excited to have figured out the origins for 'I Like You', a song I'd heard years ago but had never known the story behind. While gathering information, further excitement arose upon finding not only a superior recording to the one I had, but the B-side of the record as well. Credit and many thanks for that goes to (like a) Fish Out Of Water, a wonderful blog of celebrity recordings. This post expands upon that one.)

"Where the Arkin is. On Columbia Records" - - Below, ▼ a print ad promoting the 45 and the TV program appeared in the September 17th, 1966 issue of Billboard Magazine. 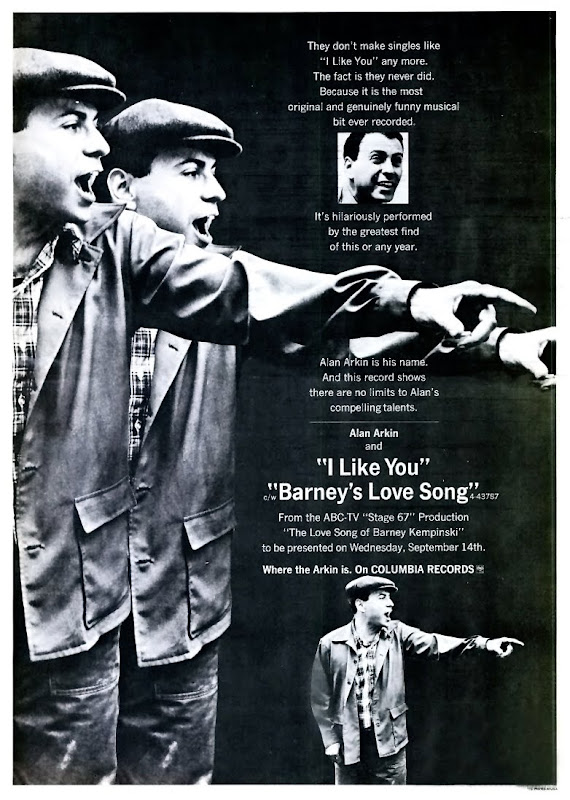